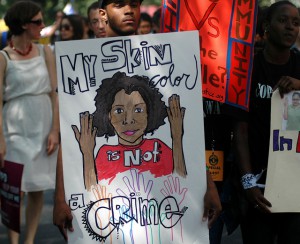 A damning new report from the American Civil Liberties Union’s Illinois chapter shows that Chicago endured over a quarter of a million stop-and-frisk encounters that ended without an arrest last summer. Of those stopped, nearly three-quarters were African-American, even though African-Americans only account for about a third of the city’s population.

Furthermore, the legal grounds on which these stops were pursued is hazy at best. Whenever a Chicago police officer interacts with a member of the public they fill out a “contact card.” In theory, these forms should be the ticket for an objective record of police activity, but in practice they’re anything but. Half the cards sampled for the ACLU report did not present a reason for conducting the stop, while others attempted to justify a stop without suspicion of criminal activity. The ACLU report concludes that many of the stops went ahead without a “legally sufficient reason.”

Police Superintendent Garry McCarthy maintains that people “should be” stopped based on crime data alone but the use of contact cards has dramatically increased on his watch.

ACLU Legal Director Harvey Grossman believes there is “no question” that McCarthy endorses these stop-and-frisk tactics.