As Tents Come Down In Freedom Square, The Spirit Lingers

A revolution brewed all summer long at Homan Square.

Outside the bleak walls of the notorious black site on Chicago’s west side, a radical transformation grew from the ground up—an equal and opposite vision of a free and empowered society that cast long shadows over the oppressive operations next door.

The Let Us Breathe Collective launched its occupation on July 20th, coinciding with Black Youth Project 100 organizers’ motion to shut down the entrance and exit to the Homan Square facility. Demanding Homan Square be defunded and the constituent resources be reinvested in the Lawndale community, “Freedom Square” became the site of new relationships—forged over shared stories and meals—as people came together in support of the Movement for Black Lives.

In early September, the occupation “pivoted” to community control of the space, as Let Us Breathe’s organizers passed the proverbial baton to local residents.

UPDATE: A CCDBR team went site to observe and show solidarity on September 18. We found no sign that the encampment was continuing. 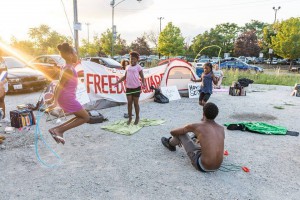 for more information on the latest at Freedom Square.