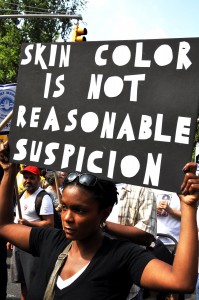 Following negotiations with the Illinois American Civil Liberties Union (ACLU), Chicago Police Superintendent Garry McCarthy agreed to measures enabling a judge to evaluate his force’s “stop and frisk” tactics on Thursday. The agreement also mandates officers to document each time a pat-down is performed. These records would not automatically be available for public consultation.

Chicago police use “contact cards” every time an officer interacts with a citizen but until now the information recorded on these cards has been notoriously vague and often ambiguous, allowing allegations of racial profiling to remain just that. The terms of yesterday’s settlement, however, should enable a keener analysis of the utility of the CPD’s stop and frisk program by creating an area on the cards to indicate whether a frisk was performed and whether contraband was found.

More information on the settlement’s terms and an analysis of the agreement can be found here.

We Charge Genocide and others working on this issue find that the agreement falls far short of what they had planned to present as an ordinance; and they express indignation that the ACLU acted on its own without proper respect for their perspective and work on the issue. Their statement here.