“The Advent of the Surveillance Society” @ Truthout.com 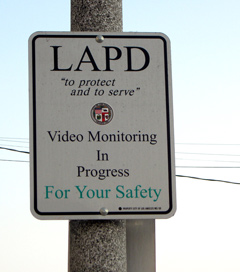 “Surveillance now is everyone’s business, as the line between intelligence-gathering and crimefighting rapidly fades and the public is conditioned to play its part.

“The work of Deputy Police Chief Michael Downing of the Los Angeles Police Department (LAPD) exemplifies the new surveillance paradigm. The head of the 750-strong counterterrorism force within the LAPD, he is on the hunt for “people who follow al-Qaeda’s goals and objectives and mission and ideology.” He says his officers collect intelligence and practice the “essence of community policing” by reaching out to Muslims and asking them to “weed out” the “hard-core radicals.”

“He adds that he is pleased that many Muslims have adopted the LAPD’s iWatch program and are prepared, along with the general public, to call in tips about suspicious activity. With “violent Islamists” as his main target, Chief Downing is also keeping track of “black separatists, white supremacist/sovereign citizen extremists and animal rights terrorists.” If threats materialize, he can draw upon the LAPD’s “amazing” backup capacity – SWAT units, direct-action teams, air support, counterassault teams and squads that specialize in disrupting vehicle bombs.”