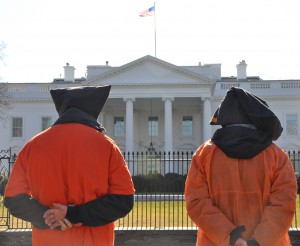 In June, the Senate passed the McCain-Feinstein amendment prohibiting CIA torture with a bipartisan 78-21 vote. The provision requires that the CIA and other government agencies follow the flawed but relatively humane guidelines in the Army Field Manual while conducting interrogations. It also ensures that the International Committee of the Red Cross is given access to all detainees. Majorities of both Republicans and Democrats voted in favor of the amendment and in opposition to torture.

Now the House of Representatives will play a critical role in deciding whether the McCain-Feinstein amendment is part of the final version of the National Defense Authorization Act. Please write to your Representative today and ask them to join the Senate in seeking to put a permanent end to CIA torture!